Free Single "Because of You" 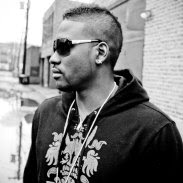 Check out this new single from soul man J Hollins -- one of Chicago's best kept secrets!

Support his music -- find out more about him at:

Be sure to hear his music on my "NeoSoul Rhythms" podcast at:

Enjoy!
Posted by arhampton at 11:30 AM No comments:

Listen to my new podcast on Podomatic.com

Be sure to subscribe and check back weekly for new episodes.

This is my way of keeping "Neosoul Rhythms" alive through internet, on-demand radio until I become nationally syndicated. :)

Lock in and tell a friend!
Posted by arhampton at 10:43 AM No comments:

Between this round of cuts and elimination of 1,850 jobs at Clear Channel in January, Clear Channel Radio has reduced its radio division’s workforce by 11.7 percent so far this year.

Replacing Tyler on V103 will be Kris Kelley, who will continue to serve WGCI program director.

“Like all media companies, Clear Channel Radio has to adjust its business to the realities of the current economy and advertising market," the company said in a statement."The changes we’ve made today complete a process begun in January. We’re not commenting on specific people and we’re not commenting on specific job functions or titles.” Others affected in this round of cuts included Jeff "Smash" Murray, who was part of Kevin "Drex" Buchar's morning show on WKSC-FM 103.5 as well as the station's music director and assistant program director, and Bill Cochran, who served WNUA-FM 95.5 in a variety of production and on-air capacities over the years. Most of Tuesday's cuts were focused on back-office operations, however.

Clear Channel also told employees it would temporarily suspend the corporate match for their 401(k) accounts.
Posted by arhampton at 9:36 AM No comments:

After attempting to use live broadcasting software from Ubroadcast that just didn't quite work well enough, I went back to the drawing board to think of another way to keep "NeoSoul Rhythms" flowing.

As a result, I have joined the pod-o-matic podcasting community. Later this week, I'll post a brand new show, but for now, please enjoy the current cast until then:

Don't forget to visit my website and groove out to the media player 24/7:

Thanks for helping me expand my web presence by passing my links on to your friends!

Ashan
Posted by arhampton at 10:59 AM No comments:

Yeah...the radio industry is doing some really flicted stuff in efforts to save money all around the country. Unfortunately, the quality of local broadcasting is beginning to suffer from all these budget cuts.

So, if you once listened to me, jazz, or blues live through the internet on weekends, or at any point during the week...now you can't anymore!

I'll let you know when things change, but for now, that's the deal.
Posted by arhampton at 8:47 AM No comments:

As I promised my newsletter group, I broadcasted for about 30 minutes with software from ubroadcast.com Tuesday night.

The broadcasting software allows you to post a playlist that runs while you're not broadcasting live and also includes chat and email features, so that listeners can interact with the host during a live session.

How cool is that? Very!


However, I did have a few problems.

The software does not consistently run well during live broadcasting. Once I was all set to go live and speak through the microphone, the program crashed. It then took me about 10 minutes to get it to load correctly again.

The second time I attempted to speak live I was able to do so for about 10 minutes before the software incurred another error and crashed again.

So although the station broadcasting software is promising, it does have some bugs that need to be ironed out by the developers.

I also had a little problem with the player. Although it takes a little while to buffer the stream, the ubroadcast player did eventually fire up for a few minutes to let me hear and monitor myself during my brief live broadcast.

Unfortunately, it to got stuck during playback, forcing me to close it out and open it again.

So, although I like the software and will probably use it again, I think the developers have to buoy their servers so that it supports more servers.

Now, some shows I listened to sounded pretty good through the player, but no one was talking live so I couldn't get a sense of how doing both would balance out overall.

Okay, in the meantime, I'll keep searching for ways to broadcast live over the internet so that we can keep feeling the vibe!
Posted by arhampton at 10:15 AM No comments: